Where is eMMC used?

Smaller than a typical postage stamp, the tiny footprint of eMMC makes it ideal for many electronic devices, including smartphones, small laptops, smart TVs, wearable technology and smart home appliances. The “embedded” part of the name comes from the fact that the storage is usually soldered directly onto the device’s motherboard, so it is not removable nor displaced easily. eMMC storage consists of NAND flash — the same tech you’ll find in USB drives, SD cards, and solid-state drives but just packaged differently.

Beyond its use in consumer products, eMMC is rapidly being adopted in many other embedded applications, such as Single Board Computers (SBC), robotics, medical devices, automotive, networking and building control devices because of its compact size, low-power consumption and numerous enhanced features. With the rapid growth of the IoT market, eMMC is finding its way to newer applications. 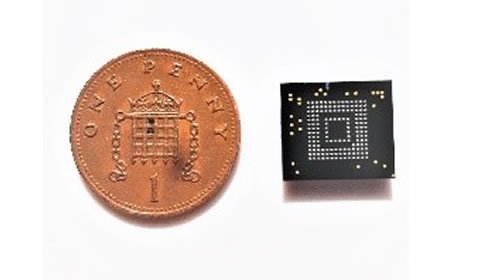 The small but powerful eMMC next to a British 1 pence coin.

The eMMC is attached through a parallel connection directly to the main circuit board of whatever device for which it stores data. By using an integrated controller in the eMMC, the device CPU no longer has to handle placing data into storage since the controller in the eMMC takes over that function, so this frees up the CPU for more important tasks. By using flash memory, the entire IC-based storage draws little power making it suitable for portable devices.

Capacities range from 1GB to 512GB and come in different grades depending on the application (i.e. consumer & industrial) The most common eMMC capacities are 32GB and 64GB which use mainly SLC or 3D MLC NAND flash, so it is ideal for demanding applications and is highly reliable. Considering its size, eMMC is capable of handling extremely large amounts of data in such a small footprint.

For developers, eMMC simplifies the interface design and qualification process, resulting in a reduction in time to market and facilitates support for future flash device offerings. The standard interface makes fast-changing NAND technology invisible to the host, so the host processor doesn’t have to keep changing its software to accommodate every NAND technology change and variation. This helps to signi­ficantly reduce the design-in complexity and shorten the quali­fication cycle.

What are the differences between consumer and industrial eMMC?

One of the most common myths is that it’s slow to boot – not true, as some eMMC solutions can now start their booting process in less than 10ms. This has enabled eMMC to be used as both data storage and a NOR flash replacement for boot code, making it an even more attractive proposition for developers designing small systems.

Consumer and industrial eMMC may look exactly the same inside and out but industrial eMMC can be extensively customised to enhance performance for the application. It is best to talk to experts to ensure you are selecting the right type of eMMC for your application.

The table below gives an overview of the key differences between consumer and industrial eMMC.